Maybe TLC was wrong. If you stick to the rivers and the lakes that you’re used to, you may miss out on chasing waterfalls — and happiness.

As it turns out, the continuous sound of water flow, like that of white noise, has a soothing effect on most people. Rumoured legends even say waterfalls make people happy.

But the truth goes beyond tall tales: Scientifically, waterfalls are a source of negative ions, which are “odourless, tasteless, and invisible molecules… believed to produce biochemical reactions that increase levels of the mood chemical serotonin, helping to alleviate depression relieve stress, and boost our daytime energy,” according to WebMD.

Translation: Waterfalls are good for you.

And that seems worth chasing. So get ready to fall for some of the most spectacular cascades around the planet. For the ultimate dose of ions, head to the one of the Seven Wonders of the Natural World, Victoria Falls. Creating a natural border between Zambia and Zimbabwe, the massive curtain of water is 1700 meters wide and falls 100 meters into a gorge. Locals call the constantly roaring phenomenon, which can be seen from miles away, Mosi-oa-Tunya or “the smoke that thunders.” The best way to take in the falls? By helicopter.

Heli me to Victoria Falls No Instagram filter needed here. The rich blue colour of the Rio Celeste in Tenorio Volcano National Park comes from the minerals of two different rivers mixing. And the perfectly manicured waterfall sitting behind it makes an idyllic setting for Boomerang gold. Also along the trail to the falls are other wonders like the “teñideros” (the dividing line where the river acquires its intense colour) and fumaroles (volcanic openings filled with boiling mud). Explore the area on the Flash Pack’s Costa Rica getaway. A little secret about Niagara Falls, which formed about 12,000 years ago: It’s actually three waterfalls. The largest is Horseshoe Falls, which straddles the U.S. and Canada. Next is the American Falls, which (you guessed it) sits completely on the American side. And finally, there’s Bridal Veil Falls, also on the U.S. side, which you can climb up behind to feel the power of the falls on the Hurricane Deck of the Cave of the Winds. The 300 square-kilometer Plitvice Lakes National Park in central Croatia is the country’s oldest and largest park, located between the Mala Kapaela and Lička Plješivica mountain ranges. The system of 16 connected lakes cascade into one another, creating a vast playground full of waterfalls. Add to that caves, forest, and wildlife, including many species of rare birds, and it’s no wonder that the site has been a UNESCO World Heritage site since 1979.

I wanna chase those Croatian falls Made up of 275 waterfalls and spanning 2.7 kilometers, Iguazu Falls is the largest waterfall system in the world. First recorded in 1541, the landmark was named one of the new 7 Wonders of Nature and sits at the border of the Argentine province of Misiones and the Brazilian state of Paraná. And the experiences on each side are completely different. The Argentine side is rustic and natural, whereas the Brazilian side’s take is more polished and refined — both thrilling and spectacular in their own right.

Add on an Iguazu excursion Stepping into Chile’s Torres del Paine is like being transported into Mother Nature’s technicolor wonderland — and part of that charm comes from the constant sound of the Salto Grande (meaning Big Waterfall), which runs from Nordenskjöld Lake down 15 meters to Pehoe Lake. Set against the background of the horn-like peaks of Cuernos del Paine, the scene looks like it was plucked out of a trending Instagram photo… no filter required! Fueled by waters from the country’s second largest glacier, Gullfoss (which translates to Golden waterfall) is a spectacular two-stage waterfall down 32 meters with walls up to 70 meters tall. And the falls represent a major victory in environmentalism — and girl power.  In the early 1900s, a farmer’s daughter Sigriður Tómasdóttir rallied to stop construction on the site when foreign investors had their eyes set on turning it into an electricity plant. But she persisted and won. That must be why rainbows are spotted here so frequently! 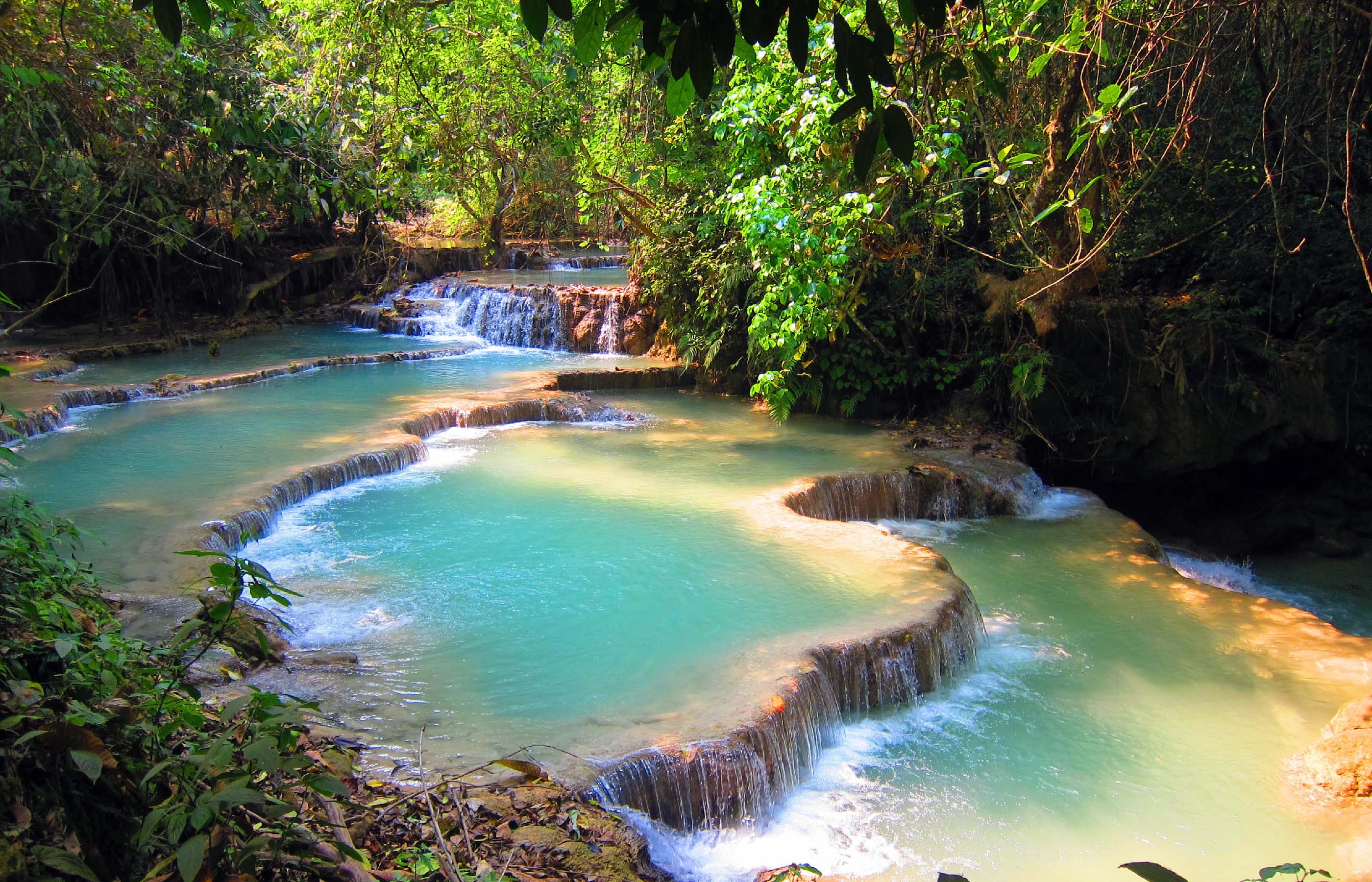 The three-hour jungle climb may be draining but your reward just might be the very definition of a happy place. In fact, the word “falls” almost seems too harsh for the gentle cascades at Kuang Si waterfall, outside the Laotian royal town of Luang Prubang. Hopping and skipping joyfully over three tiers and a 50-metre drop, water flows over the rounded travertine into a series of turquoise pools.

Go here in Thailand and Laos

The secret falls of Belize

The ultimate rainforest experience: hiking to the top of a 1,000-foot jungle waterfall and then an epic rappel down a 250-foot drop. Located inside the 7,000-acre Mayflower Bocawina National Park, the area is full of both natural spectacles (including a string of hidden waterfalls and lagoons) and man-made wonders (like the Mayan ceremonial sites).

Take me on a Belize getaway 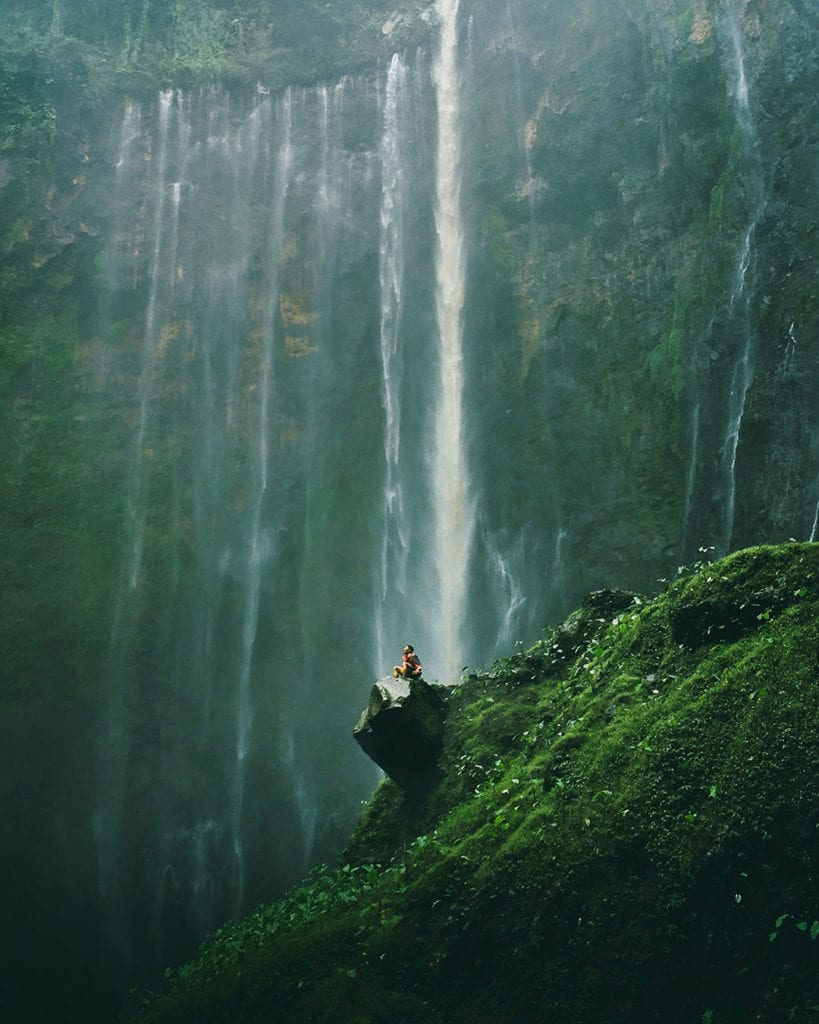 If these cascades look familiar, it’s because they’re pretty much an Instagram celebrity all on their own. Sitting in the shadows of an active volcano called Semeru, the multi-leveled falls, (which is also called Coban Sewu) is located between the Pronojiwo and Ampelgading Districts in East Java, Indonesia. From mountains to beaches, the Cairngorms National Park is a nature lover’s haven. Spend an active weekend hiking, canoeing, and even clay pigeon shooting. But the real highlight is canyoning in the area through rock flumes, pools, and waterfalls. Yup, that’s an adrenaline high times two!

I’m ready to go to Scotland

How I learnt to embrace solo travel as a man